“Yes, [we will not find a solution to political problems in cryptography,] but we can win a major battle in the arms race and gain a new territory of freedom for several years. Governments are good at cutting off the heads of a centrally controlled networks like Napster, but pure P2P networks like Gnutella and Tor seem to be holding their own.”

This is one of the few political comments that we are offered from Satoshi. This is a reference to Micheal Foucault’s interview on power and sovereignty found in Truth and Power:

The monarchy presented itself as a referee, a power capable of putting an end to war, violence and pillage and saying no to these struggles and private feuds. It made itself acceptable by allocating itself a juridical and negative function, albeit one whose limits it naturally began at once to overstep. Sovereign, law and prohibition formed a system of representation of power which was extended during the subsequent era by the theories of right: political theory has never ceased to be obsessed with the person of the sovereign. Such theories still continue today to busy themselves with the problem of sovereignty. What we need, however, is a political philosophy that isn’t erected around the problem of sovereignty, nor therefore around the problems of law and prohibition. We need to cut off the King’s head: in political theory that has still to be done.

Sovereignty, Legitimacy and How Violence Connects Them

The fundamental issue at hand is one of sovereignty–who has the supreme right of rule? Today, governments around the globe have anointed themselves with the supreme right to rule over almost every aspect of life. This is not because of their majesty or our consanguinity, but simply from their monopolization on violence, and the legal framework they use to justify it. There has been a long, and precipitous train of abuses that has created the world as it is today, and considerable injustice that has forced us to ask such questions.

We first must questions where this Right comes from. This Right is not only a historical residue impressed upon us from the evolution of society from feudalism, but also an ideological perspective that is reinforced incessantly throughout our lives. When we reduce this power down to how it operates on an individual and organizational levels, we can see beyond the garb of officialdom, legitimacy, and righteousness that it purports to be, for the crude, barbaric machine that it really is: violence organized under the banner of the state. 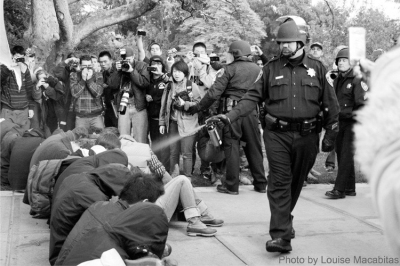 This action was legal for the police to carry out–no violence came to the officer for doing this.

Violence is the basis of power that governments use to project their legitimacy into the world. This is done through explicit means, such as police, military, prisons, laws, and regulations; but also through discreet means such as education, religion, bureaucracy, and especially elections. The discreet channels of what is seen as ‘correct’ or ‘legitimate’ is the most powerful form of controlling the conversations of ‘what is violence’ and who is entitled to it. This creates the context for which violence can be used, and thus justified. The utilization of violence to enforce the status quo (i.e. the law) is justified by the ideological discipline that demands authority to be respected, and obeyed for no reason other than that ‘authority should be respected, and obeyed’.

The fact that we are allowed to vote for one of two representatives that invariably represent the same corporate interest of the status quo, is part of the greater dialog that has us believe the legitimacy of such violence. We are told that we have ‘democratic power’ and that if we can just elect the right person (despite having no sort of electoral process for the police or army), that we will be able to solve our political woes. The truth of the matter is distinctly different.

There are people in this world that can initiate violence against others within explicit legal means with no form of recourse. We are subjects underneath the law and subject to it, and we have masters that are outside and above the law; which ironically calls itself the ‘law enforcement’.

It is the threat of this systematized violence in all capacities (legal, economic, personal) that governments base their power from. It is under this banner of legitimacy via legal violence that all governments have operated through all of history. That might shall make right, and as the official judicial decision, that is final. This is the legal bases of the laws of the state, and this is why they can command your death–because they have the power to do so.

Sadly, there simply has never been any other way to politically organize with the exception of sporadic, unsustainable revolutions that fold back into the same power structure that rely on violence. As revolutionary chaos grows, it harnesses the apparatuses of power for itself, and becomes the Specter of the State, legitimizing its own violence and corruption.

This is the theory of the sovereign–how political institutions create power over one another–it is done from the point of a sword, again, and again; through all of history.

This is the revolutionary struggle for sovereignty. As Foucault pointed out, so long as we are still grappling with this central issue in political theology of enshrining the power of life and violence one over another into a legal system, be it in the form of a senator, minister, police officer, judge or king; there will still be the problem of the great negative forms of power. Masters of all institutions seek to be good masters; but first and foremost, they seek to be masters. There is an alliance among the aristocrats that they all believe there is good reason for them to be masters over the world, and to hold power over all.

Sovereignty as we know it can only exist at the bequeathment from something or someone; or violently take from those same powers through revolution. Once entered into the subject of sovereignty, there is an immediate glaring flaw that a political body must offer sovereignty, or it must be taken by force. This force is what we seek to avoid in the first place, and what has locked humanity into a permanent struggle for power against and over itself–homos lupus homnium. For all of human history, this concept has battled between its two poles: one of accepting the sovereignty offered from another, or to fight that offering to take it for oneself. Violence and physical force are the tools used for the sovereign struggle to establish who is master, and who is slave.

The most recent political revolutions of the late 16th century shifted the power by delegitimizing the divine right of kings, and enumerating that power into republican councils. Although there was resemblances of change within the structure of power, what really occurred was a shattering; a mutation of the system and a fracturing of power among many actors.  Sovereignty was stripped from kings, and that power was divided among the various ideological structures and repressive state apparatuses that make the modern state. 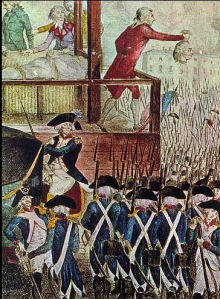 Power is no longer centralized within one body (The King), but is fractured into the government bureaucracy itself as a corporate body. Power, legality, legitimacy, sovereignty, the party as aristocracy, and state-sanctioned violence as a means to execute the law, are all part of this same political-government structure. However, these forces are no longer vested in the one body of the monarchy, but a new body of people outside the law itself. The decree of Divine Right that was once used to inflict the rule by Kings, is today being used to inflict the Rule of the State, but this time under the title of civil liberties.

Invariable, man finds himself under the bludgeon, chain, and whip, happy to oblige, for he no longer has one master, but many! And this time they are for the good of civil liberties! He fails to recognize that the defenders of civil liberties seek to protect their own rights first and foremost at the expense of his flesh.

Violence is the means that compliance with unjust laws are explicitly extorted upon the populous.  It is not the justice or majesty of contemporary legal systems that enforces the law; but ruthless, uncaring, violence. It is within the hidden manipulations of what is normal and appropriate that we also find apologists who demand to be ruled as a subjects, not people.

If people are to liberate themselves from such an insidious and total system of rule, it must be upon their own merits to help themselves. People must arm themselves with knowledge, and a willingness to think critically to create a new, and better world. Using the internet, bitcoin, and strong crypto we can create a better world, and establish new laws from within the internet to help save us from global environmental catastrophe that is coming.

Digital currencies retreats from the theology of sovereignty via violence through creating a new mode of sovereignty. Intangible and non-physical, this new form of power is created through a destituent form of power, one that withdraws and refuses to cooperate with any form of violence.

Legitimacy within cryptography is created from knowable and provably unbreakable secrets that can only exist the digital realm or mathematics. It cares not for what occurs in the physical world, but only that of which it can experience in the digital world: provable mathematics and the sacrament of the private key.

Legitimacy no longer comes from an authority within the current political or economic system, but creates its legitimacy through explicitly existing outside of any states control and the violence they enshrine.

The concept of sovereign is flipped on its head. No longer does legitimacy need to come from state institutions that are empowered via violence, but through provable mathematical systems that are not part of the violence power structure. This creates a new economy system with No God, and No Masters.

No longer do we need to pay for the privilege of our freedom to exchange with one another, or be extorted by the Gods of Government, or their Masters of Capitalism.  Bitcoin re-invents money into what it once was, and was always suppose to be–a network of legal and economic exchange for all people everywhere.

Next: The Legal Politics of Money